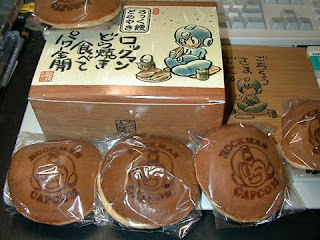 Half dozen packs of Rockman branded dorayaki were given away at Tokyo Game Show '99. Unlike the free Servbot pudding of TGS 2000, Capcom booth attendees were forced to fork over 500 yen per pack.

For the uninitiated, doryaki are kind of like pancakes more or less. Essentially, it's spongecake filled to the brim with sweetened red beans. Best eaten grilled.