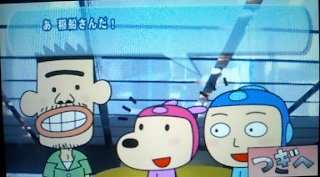 To celebrate Capcom's "Arekore" PSP line up, the company released a special UMD containing exclusive trailers for upcoming PSP titles -- presented by none other than Rockman and Rush themselves.

Included on the disc was an obscure promotional video starring animated renditions of Rockman and Rush, chronicling their adventure of "infiltrating" Capcom's Osaka HQ. Along the way, the two would present the viewer with trailers and previews for upcoming titles in the Aerokre line and interviewing the games' developers. Sounds fun, no?

Unfortunately, the feature can only be found on this particular UMD of which only 500 exist. Apparently, the item was an exclusive prize in a special sweepstakes in 2004. Guess that explains why we've yet to seen the promo on the web.

If you win, be sure to share the video with us!
Posted by Protodude at 8:06 PM