In a bit of interesting news, to say nothing of unexpected, Bandai's "Super Model Spirit" Rockman Trading Figures might be making the jump to our side of the pond, if a poster at Comic Con is taken at face value: 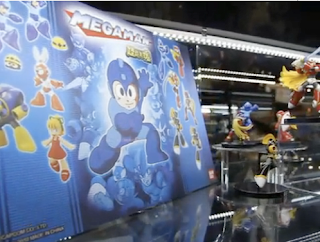 Above, a display exhibiting the figures at Bandai's Comic Con booth, with a poster advertising the line under the "Mega Man" name. Considering the figures have been largely available in Japan since May, I see no other reason to have them on public display unless they intend to distribute them in the U.S sometime in the near future. Hey, it wouldn't be the first instance a recent Rockman product was re-branded for English consumers.

In related Bandai/Mega Man news, more candidates for the D-Arts line were revealed. Among the desired Mega Man characters are Zero (X series), Zero series Zero, Mega Man.EXE and Bass. These characters were selected via a poll held by Bandai. Hit up Siliconera for more info.

[Image nabbed from Kotaku.]
Posted by Protodude at 12:11 AM