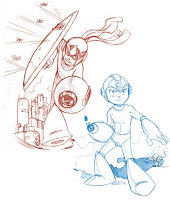 Details are fairly scarce right now but according to initial info, the book will be based on the classic series and is slated for release in 2011. Ian Flynn (of Archie's Sonic the Hedgehog fame) and Patrick Spaziante will write/illustrate respectively. (UPDATE: sample artwork released, pictured right)

No word if it will be a single issue or the beginning of a series, but this is exciting news nonetheless. Comic Con is just getting started so hopefully we'll learn a bit more about the project in the coming days. I'll keep an ear out!


----------------
UPDATE 2: Pictured above is a sample piece of concept art from the comic via Comics Alliance. Furthermore, a press release for the series just hit the web, too. The write up dates the comic for Spring 2011 and even teases the possibility of branching off to explore X, Zero, and Legends story lines. Select portions of the PR below, full piece can be found in the above link:

"With the aid of his mighty Mega Buster blaster arm and a killer creative team including renowned artist Patrick “Spaz” Spaziante and infamous Archie action/adventure writer Ian Flynn, Mega Man is equipped to blast his way back into the comic book world in his own monthly action. Arriving Spring 2011, the new Mega Man™ comic from Archie Comics promises to build a faithful legacy while exploring a vast universe of heroes, villains, and robots."

“Readers can expect non-stop action, as well as an exploration of the themes of family, choice and loyalty that make the Mega Man franchise a property that connects on a very personal level,” continued Kaminski. “From there, we hope to fully explore not only that classic world, but the other spin-offs including Mega Man X, Mega Man Zero, Mega Man Legends and more!”
"In honor of the announcement at NYCC, Archie Comics and Capcom® will each be hosting signings of an exclusive print with the Mega Man creative team Patrick “Spaz” Spaziante and Ian Flynn."

Attending Comic Con? Hop on over to Archie's booth and get those prints! 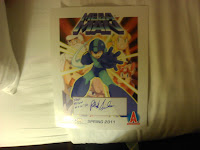 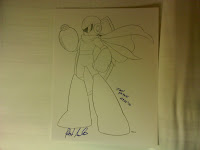 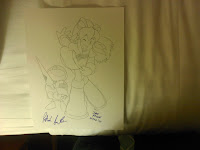