A few new pieces of artwork from Archie's upcoming Mega Man comic have been revealed courtesy of Comic Book Resources and The Sonic Stadium. One piece in particular focuses on more of Spaz's work (middle image), while the rest are from Chad Thomas. 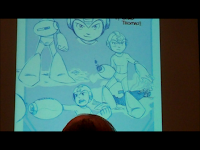 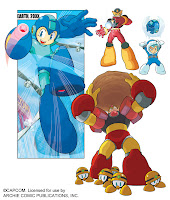 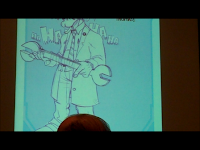 UPDATE: TMMN scored some more pieces. Check them out here!

Chad's involvement with the comic is a bit sketchy right now. I've seen some sources say he'll be working on it as a penciler along with Spaz, while others say he isn't involved at all. I guess this will be one of those wait and see things.

Anywho... whose art do you prefer? Just out of sheer curiosity...

Thanks, RockX.
Posted by Protodude at 7:52 PM