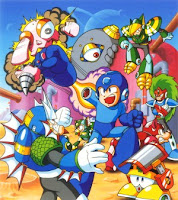 Couple interesting tidbits of note coming from the pre-Comic Con Capcom event in Brooklyn, New York today. The first concerns the possibility of cooperative multiplayer in Mega Man Universe. This coming from a tweet from Rockman Perfect Memories' Protoman Blues, on the scene at today's Q&A panel:

"So far, MMU has no plans for co-op as of yet. This could change."

When asked for more details, PB had this to say:


"My friend Lou asked if there was any co-op planned and they told us "not at this time, but it's something that can be brought up" so it doesn't look like they were planning it."

With an undetermined 2011 release, there's still a bit of development time should Capcom decide to implement multiplayer. I'm sure if there's enough demand, by both the fans and the press, they'll consider it.

Also, during the panel, PB inquired about the likelihood of the Game Boy Mega Man games (Rockman World) being released for the Nintendo 3DS Virtual Console:

"I did ask if there was any chance they'd put the Mega Man World GB games as downloadable games for the 3DS's DSiWare thingy, and he told me while he doesn't know any plans, he can't think of a reason why Capcom wouldn't put them on there. LoL, a SHRED of hope at least."