Rockman 4 Coming To US PlayStation Store This Week 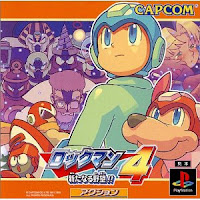 Joining the ever-growing library of PlayStation Network PSone Imports is none other than the Complete Works version of Rockman 4. The official PlayStation blog reports the game will launch on Tuesday, September 6 in North America. Product summary below:

"For a year the city has been quiet, but a new robotic terror has gripped the city. That scheming scientist Dr. Cossack has arrived in town with eight new metal maniacs who are bigger and badder than anything Dr. Wily ever dreamed of.

It’s going to be a cybernetic showdown as the streets of the city erupt with the sizzling sounds of molten metal! Armed with the new Mega Buster, Mega Man runs, jumps and dodges his way through mazes of metallic munchkins on his way to the Siberian citadel of Dr. Cossack for the findl cataclysmic clash!"

As usual, the game will remain in its native Japanese language. That shouldn't be too much a problem gameplay wise, but navigating those in-game menus may prove difficult for some. For those folks, I recommend checking out Rockman Perfect Memories' Mode Select Guide. Great source to get you to your destination in a jiffy!

Rockman 4 is expected to retail for $5.99. If I'm not mistaken, PlayStation Plus members can snag the game at a bit of a discount, although those details were not disclosed.

Credit: The Mega Man Network
Posted by Protodude at 8:33 PM