Good on their word, Capcom has begun to ship out a form of compensation to Devroom members whose work was slated to appear in  Rockman DASH 3. Below, you'll find the contents of the Japanese package, recently received by CAP Kobun (whose Donner Wels mecha design was selected as the Bonne family's latest mecha). 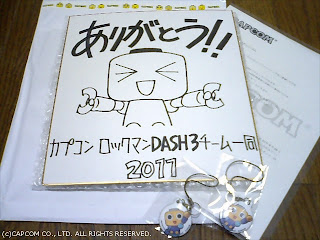 Inside the envelop, a heartfelt thank you letter reads, "Thank you! From all the DASH 3 team at Capcom. 2011." Also included, a set of mobile cleaners which were originally planned to be distributed at Capcom's ill-fated 3DS event event in Akihabara (cancelled in the wake of the horrific natural disasters). All in all, it's a pretty slick package. More pictures of the items here.

The English Devroom are planning on distributing something to fans in the West. The item has not be disclosed, nor have we been alerted if it's shipped out. Shouldn't be much longer now, hopefully. Keep your eyes peeled to your mailbox!

Credit: The Mega Man Network
Posted by Protodude at 12:23 PM