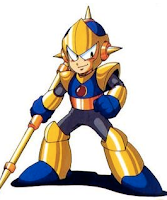 After having heard musings of it coming months ago, Mega Man: Dr. Wily's Revenge has finally arrived on the Nintendo 3DS eShop. And not just in Europe territories, but in North America as well. The Game Boy classic will run you $3.99 (£3.60).

Wily's Revenge may not be the best of the Game Boy sub-series (that honor goes to V), but it does boast a nice, bite-sized Mega Man experience. Also Enker.

With Wily's Revenge under our belt, we can look forward to the next 3DS Virtual Console release. What could it be? Well, there's a lot of possibilities from Mega Man II, to the early-late 2000 Game Boy Advance outings (Battle Network, Zero, etc.). Anything in particular you'd like to see down the line?

Thanks for the tip, Kagu
Posted by Protodude at 11:19 AM