What's the most worthless video game in Japan? Jeremy Parish and his 1UP crew wandered the streets of Akihabara to find out. Parish's journey would lead them to "Friends", a small but popular retro game shop at the edge of Chuou-dori. Shimmering midst a sea games, a sight that could only be described as a mass grave... 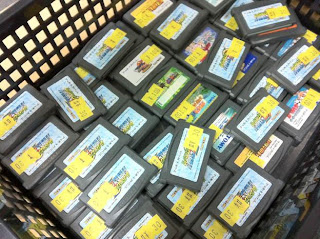 "We've seen cheaper games than 30 yen (about 40 cents) apiece, but never quite so many at one time," writes Parish. "The sheer numbers of unwanted carts in this basket -- about 90% a single title by volume -- means that you could buy this entire collection for about 10-12 bucks and... I don't know. Use them as tiny bricks in your toilet basin to reduce your water bill?"

The dominate unloved game in question is none other than Battle Chip Challenge, better known as Rockman EXE Battle Chip GP in Japan. Released in the summer of 2003, the title offered a bit of a tactical twist on the standard Battle Network formula. It's not a bad game per se, but it's very existence was relegated "filler" before the release of Battle Network 4, the most successful title in the series' history. To say BCC was quick cash grab is an understatement.

"But don't be sad, Mega Man fans. Battle Chip Challenge has a long way to go before it's regarded as a legendary kusoge (crap game) on the level of Moero! Pro Yakyuu (aka Bases Loaded). It would be tough to take a bath in this relatively small collection of carts."