Now here’s another blast from the Blue Bomber’s past, dating back to a time when the franchise was bursting with vitality. Ever wanted to become a game designer for a day and tell those Mega Man game designers what you think? Well, that's exactly the offer Capcom and Minute Maid gave children in 2003. 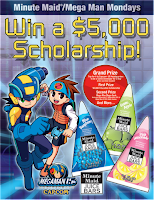 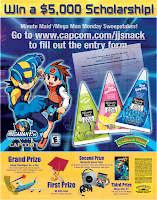 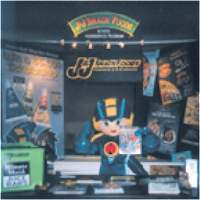 On the verge of the franchise's 15th anniversary, Capcom partnered with a number of corporations to spread the good word, and promote the then-latest batch of games. The joint venture between Capcom and Minute Maid, in particular, would mark one of the largest (North American) Mega Man promotions in the brand's history.

Select boxes of Juice Bars would contain a URL to a special website: this one here. There, young fans were encouraged to participate in a truly historic contest. Filling out this form, you'd be eligible to win a trip Capcom's US headquarters in Sunnyvale, California to become a game designer for a day. Runner-up prizes included:
And who was the lucky youngster to win? Why that'd be this lad, Warren, whose last name I won't even attempt to decrypt. A belated congratulations to you, sir. I wonder, did Warren actually have an impact on a product that now rests in our hands today? I won't be attempting to hunt the man down to ask, but it's fun to imagine what that experience must've been like. Best day ever? Uh, yeah.

In hindsight, this is one neat sweepstakes. No developer (that I'm aware of) does this sort of thing today. Lack of interest, or too much of an investment? Could be a little of both, but I belive this is definitely something companies should look into again. Giving kids a chance to immerse themselves in the developer environment is an awesome prize. You're pretty much cementing the youngster's dream to pursue a career in the industry.

For you archivers out there, I'm publicly releasing a small batch of promotional assets from the contest I've collected over the years. Yeah, I'm kind of a pack rat. You can download the file here! On a related note, can you believe the archive logged the actual contest entry form? I know, right?! Wonder what would happen if you sent one in today? Hmm...
Posted by Protodude at 1:55 AM