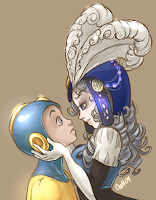 The two year wait is over. Overclocked Remix has just released the long awaited Mega Man 9 remix album Back in Blue, which you can download entirely for free! Having listened to the OST in full, I can safely say there's something in there for everyone. From rock to electronica, no stone is left unturned. Back in Blue is just oozing with talent, comprised of some of OCR's best. You'd be a fool to not give it a listen!

And now, a few words from the album's director, k-wix (Dustin Kulwicki):

"The goal of the Back in Blue project was to remix the Mega Man 9 soundtrack in a variety of styles and pay tribute to one of the greatest platforming series of all time," said album director Kulwicki, whose efforts have resulted in an album full of funk, rock, electronic, dance, spaghetti western, acoustic and fusion interpretations of the game's original music. "I am proud with not only the completion of this project, but the quality of the artists that shines through in every single track."

The journey to completion was not without a fair share of pitfalls. Back in Blue was met with a slew of nasty delays, but the team managed to persevere and pumped out an amazing product. Exceptional work. Download it now!

Thanks for the tip, Trip!
Posted by Protodude at 10:42 PM