We Are Rock-Men! Samples Surface 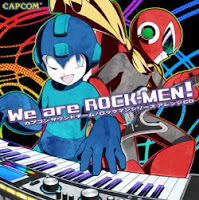 Additionally, E-Capcom has revealed the titles of album's seventeen tracks, viewable here. Majority of the disc covers tunes from the classic series, but you'll also find some pieces from the X series as well. Surprisingly, there's a Rockman DASH tune in there too; Flutter vs. Gesellschaft. No sample for that one, I'm afraid, but based on what we've heard so far, you can count on a lovely arrangement.

We Are Rock-Men is due on September 21 in Japan, pirced at 21,00 Yen (roughly $27.29). Unlikelky the album will come stateside, so keep an eye out on for the inevitable rip to appear on YouTube.