Aside from the occasional storyline-based updates, it's been awfully quiet on the Rockman Online front. Seriously: our last bit of actual news dates all the way back to November 2010! With two major game cancellations under our belt, people are naturally beginning to worry about RMO's future. Fortunately there's no need to fret; Rockman Online is alive and well. 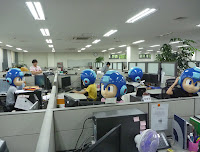 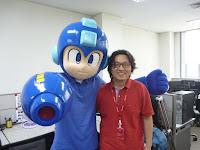 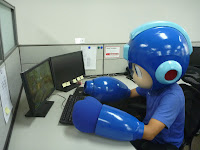 Rockman Unity's Ucchy-san has been running a series of reports focusing entirely on the game's development, chronicling his time spent with RMO developer Neowiz. The reports indicate a steady development, with today's post in particular briefly mentioning the game entering the final stages of production. Neowiz remain devoted to producing a high-quality product, all the while having some fun in the process (above).

No new information about the game itself was disclosed; however, Neowiz assures Rockman Unity that the game has been "powered-up" since its last appearance at G-Star 2010. According to the game's producer, Rockman Online has seen major improvements in terms of story depth and the inclusion ofa slew of new gameplay features... features that will be revealed at a later date.

And now, the ultimate question: is Rockman Online still exclusive to Korea? Yes. Rockman Unity reports the game continues to remain exclusive to regions throughout Asia -- a Japanese release, however, is being considered. No mention of an English release, I'm afraid. Still, if this is something you'd like to see in your region, I suggest making a request directly to Capcom.

Good to see at least one game is coming along... even if most of us don't necessarily get to play it.
Posted by Protodude at 10:20 AM