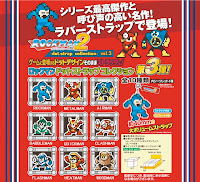 Capcom and Creative Union are teaming up once again with the arrival of all new Rockman Dot straps. A new batch of the popular sprite themed charms were revealed some hours ago at Rakuten.

Volume 3 will once again play host to ten charms, the focus this time being on the cast of Rockman 2. Metal Man, Air Man, Heat Man... the gang's all here. A lone Rockman sprite fleshes out the batch, depicting the blue bomber in agonizing pain (guess they're running out of Rockman frames to immortalize in rubber). The identity of a tenth charm is currently shrouded in mystery...

The new lot of straps are due out in January, 2012, priced at 4,000 Yen ($52.00) for a full set. You can usually find them sold individually at a cheaper price, but it's random. You never know which character you're going to get.

Credit: The Mega Man Network (thanks, Heidi!)
Posted by Protodude at 12:14 PM