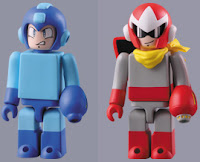 Just a friendly heads up for those of you who would like to own your very own LEGO-ish version of Mega Man and his bro Proto. Over on Capcom Unity, they’ve announced a fall blowout sale promotion. Applicable to a number of products, you'll find a particularly tantalizing deal on the English versions of Kubrick Mega Man and Proto Man, as well as their 1Up Be@rbrick counterparts.

Originally $30 a pop, Capom has discounted both the Mega Man and Proto Man sets down to a cool $20.97. Considering the little guys can fetch anywhere from $40 to $60 on the secondhand market, this is quite an offer.

Stock, as per usual, is limited. Approximately 500 pieces were produced solely for the Capcom Store, give or take. Once they're gone, they're gone! The fall blowout sale runs from now until Sunday, October 2nd. A little ways away, but you may want to act quickly before they sell out.

Make haste and grab your Zenny -- the Capcom Store awaits!
Posted by Protodude at 3:06 PM