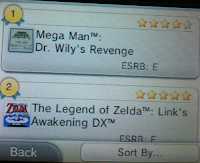 Nearly a week since its North American and European debut, Mega Man: Dr. Wily's Revenge has quickly become the top selling game on the Nintendo 3DS Virtual Console. And who says a Mega Man game on the eShop can't sell? Tsk-tsk.

Although specific sales figures were not divulged, Revenge managed to dethrone The Legend of Zelda: Link's Awakening DX, who previously held the number one spot for several weeks running. That tells you quite a lot right there. Bear in mind, the game is a long ways off from topping the "All Software Charts", but today's victory is certainly a start in the right direction. What can I say? People love Mega Man on-the-go!

It'd be nice to see where the game placed on the Japanese charts, but I don't have that info in front of me at the moment. I'll look around and see what I find. Of course, if you own a Japanese 3DS yourself, you can give me a holler in the comments.

Thanks for the tip, Ace_Cloud!
Posted by Protodude at 2:02 AM