The Zero Figurine That Never Was 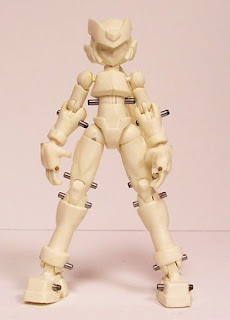 I shed a tear every time I look at this.

Back in 2006, it was reported that Jazwares Inc., makers of several Mega Man toys, would develop an over sized poseably Zero figurine that was roughly a foot tall. To say the least, it was a figure designed for the fans, especially those who were disappointing in JW's previous attempt at MM toys.

Early reports indicated that Jazwares outsourced the sculpting of the figure to SOTA Toys!, renowned for their popular Street Fighter Action figures. "Rene," the sculptor of the figure left fans this brief message of what to expect from the final mold:

"He's got the Z-BUSTER, pair of Z-SABERs, CHAIN ROD, and a pair of RECOIL RODs. The chain rod is made in segments and looks pretty bad@$$. Nothing is set in stone but I think those are all the weapons he's getting. Jazwares right now is trying to solicit it so that it won't be something you only see on here and can't own. So tell everyone you want this line to happen. From what I know Capcom really wants this to happen. I want this to happen to. Go spread the word. TELL EVERYONE!!

PS. Don't treat this like a SOTA thing. This is something I'm doing on my own. Also, suggestions are welcome. Who do you wanna see get the super poseable treatment?"

It's a bit of a mystery why the project fell through as we (the fan base) were never informed of its fate; Rene disappeared as well as some of Jazware's Mega Man team, leaving us hanging.