A Look At "Intuition! Rockman" 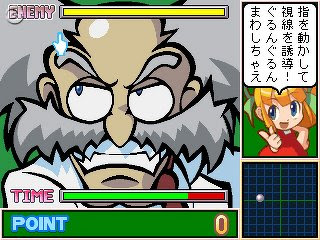 Rockman games have a long history with Japanese mobile phones, a good majority of them being ports of older titles, with the occasional exclusive such as Rockman Tennis and the famous Rockman DASH: Great 5 Island Adventure. Among these exclusive mobile phone games shines "Intuition! Rockman", quite possibly the most obscure Rockman title to date.

I!RM isn't your typical Rockman game, it's more of a collection of mini games with a very interesting twists: all twelve mini games are controlled through a motion sensitive phone known as the D904i.

Gameplay is executed through a series of gesture based controlsranging from shaking to tilting. One such game goes by the name of "Spinning Wily." (above) The goal here is to defeat Wily by making him dizzy. All you have to do is tilt your phone in various angles until the evil doc is down and out. 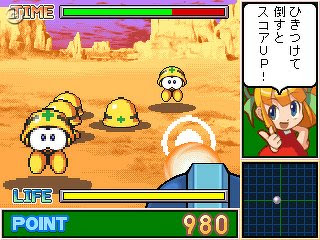 Other than the collection of mini games, there is also a multiplayer mode of sorts, an "album mode" (?), and a online score ranking board.

Unfortunately, because of the game's obscure nature (and lack of motion controlled phones outside of Japan), there's very little hope of it getting a localization. Still, that won't stop you from ogling at these pictures, quite possible the best look at the game you'll ever get.
Posted by Protodude at 12:36 AM