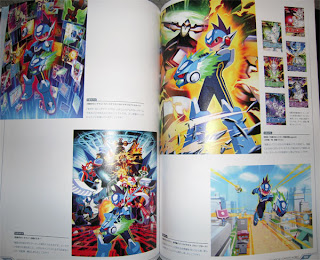 Heat Man recently got his copy of Ryuusei no Rockman Official Complete Works in the mail and as one would expect, he graciously posted some photos of the book's contents at The Mega Man Network. Heat writes:

"The book is pretty standard as far as the Official Complete Works series goes. It may be understandable why, when the book was first announced, it was tentatively named Ryuusei no Rockman 3 Official Complete Works - pretty much the first two thirds of the book are dedicated to that one title. Numerous pages are devoted to not just showing artwork, but slices of various levels of detail of that artwork. There’s also plenty of unused stuff, such as Pirate and Angel Tribe forms."

You can check out the complimentary photos here.
Posted by Protodude at 6:56 PM