"ZX3 Is Certainly a Possability" 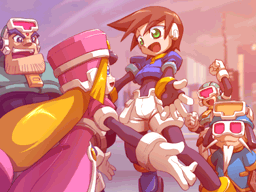 Nearly a year after an array of rumors and speculation, we may have some concrete information regarding the probability of a Rockman ZX 3. Capcom of Japan's head of strategic marketing, Yuji Itou, apparently responded to a fan's concern for the title:

"We're working on a few strategies, a ZX3 is certainly a possibility. Together, let us determine the franchise's future!"

And there you have it. I can't vouch for the legitimacy of such a response, but I can assure you that the fan who e-mailed Itou-san is a trusted friend of mine and a frequent PRC visitor (who has chosen to remain anonymous). Best not get your hopes up; ZX3 rumors are known to fall over like a led balloon.
Posted by Protodude at 3:23 PM