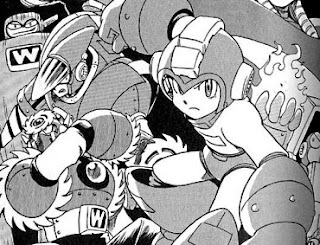 If you may recall, Hitoshi Ariga previously announced plans for his new Rockman publication: "Rockman Maniax." Maniax, a book compiling Ariga's Rockman fan art and pre-Megamix work, was said to be officially revealed at his blog on December 17th, 2008-Rock's 21st birthday. December 17th passed with no word of the book's details, leaving us hanging.

Fret not however; in place of the Maniax announcement was a short message from Ariga congratulating Rockman 21st B-day as well as promising to keep us up to date on his "latest work," presumably Maniax (and/or Megamix 4).
Posted by Protodude at 2:00 AM