Rare RM EXE 5 "The Movie Editon" Up For Bidding 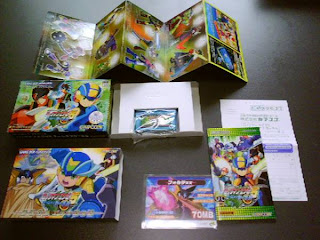 Now this is quite the collector's item!

Up for bids on Yahoo! Auctions Japan is the extremely rare, Rockman EXE5: The Movie Edition boxed set. Released back in 2005, the box set was distributed throughout Japanese move theaters in celebration of the Rockman EXE/Duel Masters cross over film.

Basically, the set is a repackaging of the Team of Colonel version of EXE 5 sporting new artwork, a sheet of stickers/advertisements, and the slick "Forte XX" E-Card.

Sure, it doesn't look like much, but serious Rockman collectors may want to invest in this, especially since it's going for a mere 611 Yen (approx. $6) with no bids. View the complete auction here.
Posted by Protodude at 2:00 AM