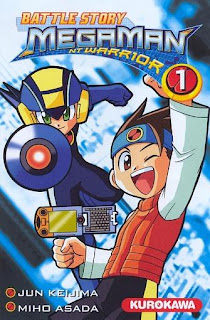 One of my most frequently asked questions concerns the existence of a supposed "official" translation of the Battle Story Rockman.EXE comics under the NT Warrior brand. This assumption is based upon the discovery of english language variations of the book covers, leading many to believe the comics will be distributed in North America in due time. So, what exactly is going on here? Did Viz Media pick up the distribution rights to Battle Story? Nope.

What we have here is the cover of an official Battle Story french translation under the NT Warrior brand. Apparently, two years ago, Kurokawa Books began translating and distributing the series throughout Europe via online vendors (such as Chapitre'). As oflast year, all four volumes of the series have been translated into french.

Currently, Viz Media has no official plans to translate/distribute the series in North America. However, they still hold the license to all Shogakukan related Rockman comics, so there's always a chance.
Posted by Protodude at 2:20 AM