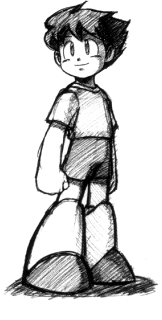 As the year comes to a close, let us take a moment to reflect upon the Rockman news stories that made 2008 and year we will never forget.

-Rockman Rockman Selling Like Hotcakes?
In March, Rockman Rockman saw a sudden surge in sales, two years after its original release. Sales were so high that it outsold the highly anticipated Devil May Cry 4. The streak didn't last for more than a few weeks however, for a game that was considered a commercial failure, this was great news.

April 2008
-ZX "Extremus" To Be Revealed At CAPTIVATE '08
Oh boy, this one was a doozey. Rumors of a ZX3 were prominent throughout 2008, but out of all the rumors, ZX Extremus truly stood out. ZXE was said to be a prequel to the ZX series, starring a young Prometheus and Pandora as they set out to find potential Rockmen to outmatch Model ZX.

June 2008
-Holy Sh!t, Rockman 9 Is Coming!
What more can I say? Rockman 9's announcement remains the biggest news story of 2008. Thanks to the efforts of "The Shadow," PRC became the source for Rockman 9 news-bringing in thousands of hits a day. You can check out a retrospective of The Shadow's activities here.

August 2008
-Another Nail in ZX's Coffin: ZX Blog Closing Its Doors
The closing of ZX Blog was a huge blow to all of us. Whatever hope we was left for a third ZX ended upon the blog's shutdown.

-Best Promotional Item Ever: Capcom to Release E-Tank Beverage
August marked the debut of the Rockman 9 E-Can beverage, a sports drink cleverly disguised in the image of an E-Can. Many lolz ensured.

September 2008
-INAFUNE DESTROYS CATACLYSM THEORY
Finally, after years upon years of speculation, Keiji Inafune put an indefinte end to the notorious "Cataclysm theory." The Cataclysm theory states that Zero, upon his completion by Dr. Wily, massacred Rockman's family (Roll, Auto, Dr. Light, etc.) to bloody pulp. When Capcom USA announced a Q&A session between Inafune and the fans, I jumped at the opportunity and asked him the fateful question: "Did Zero really 'kill' the family between the events of the Classic Mega Man and X series? " His reply?

"No, Zero did not kill them. According to the way I created him, Zero is not such a person--it is not in his profile."

-MegaMan 9 Press Kits
In honor of MM9's US release, Capcom cleverly created a series of mock MM9 NES packages. A total of 200 press kits were created and distributed to members of Capcom-Unity.

Ocotober 2008
-RUMOR: Sega Vs. Capcom To Be Revealed At TGS
This fun little rumor claimed Sega and Capcom were hard at work on a crossover game known as "SEGA vs. Capcom: Great Clash Generation." The game was described as a "hybrid RPG-fighting game" set to release on the Nintendo DS in Q1 2009 with a "likely" PSP port later in the new year.

December 2008
-Nintendo Dream To Reveal "Secret" Rockman Project
-Coro Coro Teases New Rockman, Holding Boss Design Contest
Nintendo Dream's announcement to reveal a new Rockman project+Coro Coro's upcoming boss design contest seem to imply the coming of something new, but what? It is much too early for something along the lines of Shooting Star Rockman 4 however, we can't judge anything until the details of Coro Coro's design contest are revealed. Hopefully, we won't have to wait too long.