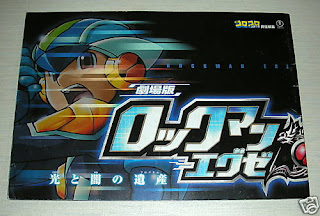 The Rockman EXE theatrical film marked the Blue Bomber's first foray onto the silver screen even though it was billed as a double feature alongside a similar Duel Masters movie. To celebrate, Capcom released a plethora of theater goods such as game bundles, collectible coins, and the traditional movie program booklet, the later of which is currently up on the auction block.

The book, containing concept art and developer commentary (entirely in moonspeak), has a starting price of $9.99 with an additional $14.99 shipping. It's a neat little book, worthy of belonging in anybody's collection, but I think you can find it much cheaper; I got my copy two years ago for a mere $5.
Posted by Protodude at 4:19 PM