In news not relating to Mega Man (that we know of), the Capcom Unity crew will be live streaming footage of five upcoming games all next week: 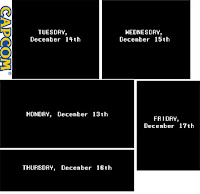 "Next week, we've decided to stream five upcoming Capcom games (one for each day of the week) so that you folks can check out these titles in action! Tune in each day next week for a different game! We'll be playing each game for about an hour and we'll be sure to give you a heads up on which game will be featured by revealing a title each day." (see the above picture)


The identify of the five titles are currently shrouded in mystery, however chances of one of those being an upcoming Mega Man title, Mega Man Universe or maybe even Legends 3, seems pretty likely. Come to think of it, one of the mystery titles will be featured on December 17th, the same day as Mega Man's 23rd anniversary; perhaps we'll see something of interest around then..?

While I'm all for seeing Mega Man Legends 3 in action, I'm a tad more curious to see what's going on with Mega Man Universe, a game that hasn't received any attention since mid-September. I'm certain everything is okay development-wise (it hasn't been canceled, contrary to rumors),  however it is puzzling to see it go off the grid after a slew of hype. Seeing the game after after all this time would be reassuring.

We'll just have to wait and see, I suppose! Let the speculation begin.