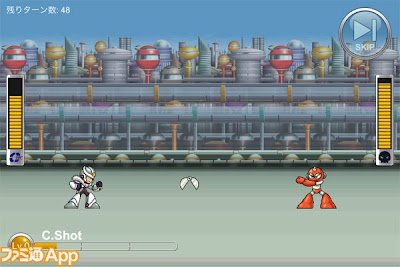 The release of Rockman Xover could only be days away, so to no surprise, Famitsu has shared with us several new details about the game. All sorts of topics are tackled like Battle Memory, Armor Customization and -- surprise! -- the return of a classic heroine. Hit the jump for the lowdown. 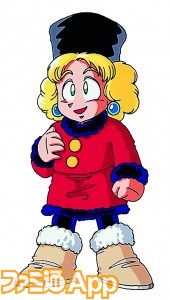 Firstly, Kalinka Cossack will be making an appearance as the player's navigator. She's all grown-up, now 14-years old. Comparatively, Kalinka was 9-years old in Rockman 4. How all this fits into the established canon is up for debate, really.

Moving on, the article has provided some details on how the game will flow.  You start out in the above screen where you are prompted to select an stage, each comprised of its own set of quests. Once in the stage, you can choose to manually jump and shoot (while automatically running forward) or opt for the controversial "Auto Play". And that does exactly what you think it does: the game plays itself, shooting and all.

Auto Play is recommended for players who want to progress through stages quickly... but if you want to collect items and upgrades, it's best to play the game yourself. 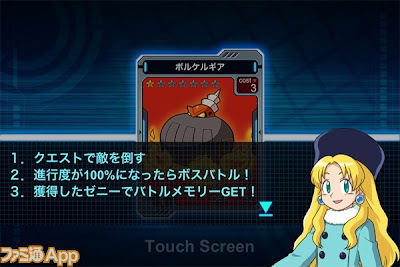 You can also find rare items in stages called "Map Parts."  Completing a map by collecting enough map parts allows the you to challenge a Master Boss.  Winning these battles will yield greater rewards.  Now, because these Master bosses are a bit of a challenge, you'll have the option to summon a friends' OVER-1 to help you out (equipped with their own Battle Memory cards and skills).  Working in pairs can yield better battle chips and items than solo play.... BUT the reward changes depending on each players' contribution in battle.

Speaking of friends, there's also a Team Battle Mode. You and some compatriots can join forces take down a unique boss in the middle of a quest. Oddly enough, the boss will not attack you; instead, it's trying to get away. Your goal is to defeat it in time before it flees the scene!

Team Battles can also be played competitively against another team. Here, one of your friends' OVER-1 is randomly chosen to be your partner. Your partner is controlled automatically and you two work together to defeat the boss before the other team. Successfully come out on top, you'll be handsomely rewarded with rare Battle Memory.

And for those lucky enough to have access to next week's Famitsu App Magazine, you can get equipped with a special OVER-1 Battle Memory card, usable in-game.  The code from the magazine will be redeemable until December 17, 2012.  So maybe the game isn't coming out next week after. Maybe. The only thing we can be certain of is it will land on iOS no later than December 17.

For more images, head on over to the source.