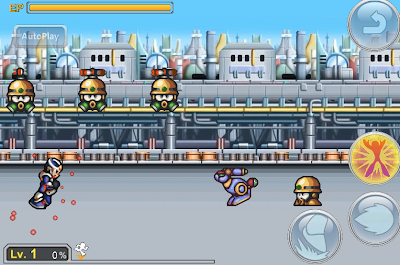 Keen to try out Rockman Xover before it's released? Press Start, CutmanMike and Brotoad put together a little flash game that recreates the game's gameplay. It's an authentic imitation based on the screenshots and small bits of footage we've seen so far. Go knock yourself out and play it right here.

... Oh, you're back? Alright. Now you're probably wondering, "is that how the game will really play?" Essentially, yes. Click here for some real gameplay footage and compare.

Amazing, no? Even if the final product turns out a smidgen better than expected, you've got to give the guys who made this copy some props (fun fact: this was made in under 24 hours). It's pretty neat in and of itself!

Thanks for the tip, Press Start.
Posted by Protodude at 7:42 PM