Oh My, Another Soundtrack 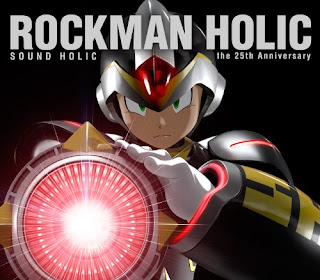 Not even letting the dust settle from the Rockman EXE Transmission soundtrack announcement, we have some more bad news for your wallet. Get ready to hemorrhage more Zenny because another soundtrack is on the way!

Produced by SOUND HOLIC, "ROCKMAN HOLIC ~the 25th anniversary~" will consist of songs primarily from the franchise's heyday (the "early" Rockman games, but not necessarily limited to Classic series). The pieces cover a number of styles from jazz and rock to dance. There's going to be some vocalized pieces, too, what with aNa Takahashi, A~YA, 709sec, aki, Hanatan and anporin lending their talent.

The soundtrack comes out on December 19th for 1,980 Yen (roughly $23.25 US). The first run prints will come in a special package. Not so sure what will make it special, but these things are usually bundled with a fancy book. We'll see.

Pre-orders are go from Amazon Japan. Keep a close watch on your favorite import retails in the coming days!

Thanks for the tip, Erico
Posted by Protodude at 3:30 PM