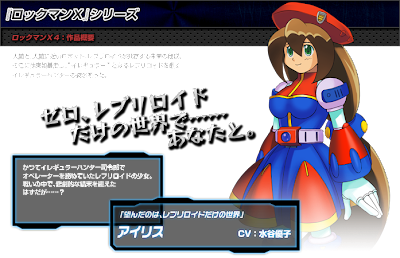 Running a little late on this one, but what the hey: The Project X Zone official site has updated with some additional details on Iris' appearance. Much of her personality from X4 has been retained, according to her PXZ bio. She still longs to live out her days with Zero in a Reploid-only world; a wish uttered in her final moments.

It would seem PXZ takes place some time after X4... but we're still not sure how (or why) Iris is "alive." Speculation says she could very much be an illusion rooted in Cyberspace (a central area to the PXZ storyline). As cool (and likely) as that sounds, we won't know for sure until the game releases next week.

Anyway, you can see some more Iris-related goodies at the Project X Zone site. Along with some much prettier screens of her confrontation with X and Zero, we also have some voice nice samples to sample. Check it out.
Posted by Protodude at 10:55 PM