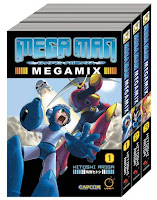 It appears there is a possibility that the Mega Man Megamix box set from UDON has been delayed. A tip from RockX points out that the AAA Distribution listing for the set has changed from its original October release to a vague "TBA." Meanwhile, Rightstuf has gone and updated their listing with a November 14th release date.

Mind you, UDON haven't even formally announced the set yet. What we've been seeing so far are early leaks. That said, an official release date will probably surface right around the time the set is, uh, actually announced (e.g. press release). I suppose we'll see what happens.

In any case, I think a Megamix box set is a great way to get caught up quickly. And who knows? Maybe a Gigamix set will follow soon after.