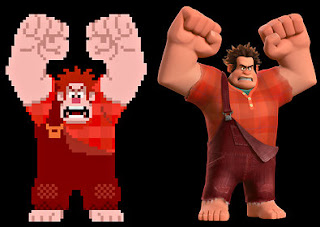 As far as we know, Dr. Wily is no longer in Disney's video game-inspired flick Wreck-It Ralph. However, the visage of the 8-bit Blue Bomber actually helped animator Wayne Unten in designing the look and movement of the 8-bit version Ralph, according to the New York Times. Sure, it's not quite the Mega Man cameo many had hoped for, but it's a noteworthy contribution to the film overall. The full article is here, highlights below.

"Before drawing the 8-bit version of Ralph, Mr. Unten turned to Donkey Kong, Super Mario Brothers and Mega Man for inspiration. “These are characters that, instantly, when you think of an eight-bit character, is where your mind goes,” he said. Mr. Unten joined the project when the 3-D version of Ralph, near left, was being developed. But he had seen some early concept work on the eight-bit version that he improved on, far left, following the rules of 8-bit game design."

“I was seeing things where, instead of two pixels wide for the eyes, it was one and a half pixels,” he said. “And to break a pixel into a half was a big no-no for me. That’s not how it was in the games. I would say, jokingly, ‘We have to respect the pixel.’"


Be sure to check out the full article for more interesting details! Wreck-It Ralph opens in theaters Friday, November 2nd.
Posted by Protodude at 9:22 PM