Spotted in the latest issue of GameSide magazine: 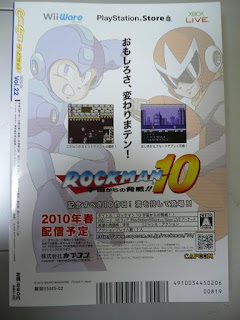 On a related note, the aforementioned magazine featured an interview with Rockman series composer Ippo Yamada who confirmed he has a hand in the production of the RM10 soundtrack. Yamada expressed his excitement with working on chip tune music once again (he previously composed a few pieces for RM9), and looks forward to Rockman 10's release.