Thanks to our pals over at The Mega Man Network, we now more delicious details on the playable Mega Man 10 demo at CES.  The site is featuring a hands-on report of the demo, which consisted of a fully playable stadium stage. A portion of the report below: 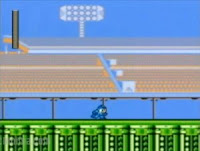 " I was able to play the XBox 360 edition of the game. The only stage available for the trial was the stadium themed stage (unfortunately I’m not allowed to divulge the boss’s name now). The stage starts in a stadium field with pitching robots that lob baseballs at you, which sort of arch down at you and come back up. Soon, however, you head underground, facing small locker doors that open from the background and shoot at you, and enemies similar to the Springers from Mega Man 2 – when you disturb these guys, not only do they spring around wildly but fire off shots as well.

"Very soon you get to the game’s midboss, which is a large soccer goal-like structure with a robot head. A soccer ball flies in and bounces around the room, and then the robot goal post will try to smash you with its hands, and knock the ball around some more. This was easily the most frustrating enemy in the demo, and took me a couple attempts to beat.

You then face more of the above mentioned robots, along with basket-like robots that toss various kinds of balls at you, and you must head upward using platforms shaped like huge basketball hoops. As you progress upward, you’ll encounter soccer ball shaped platforms that will briefly rise into the air when you shoot them, and fall back down. But after you get back to the ground level, you’ll face against the same platforms but with spikes, lined up in long rows. You must continually shoot at them and pass under when they fly up."


Complete report available here.  Also, expect to see some complimentary video footage of the playthrough soon. I'll keep you posted on that one!
Posted by Protodude at 9:40 PM