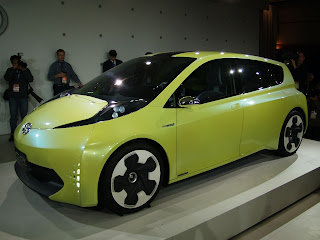 "The four-seat concept was designed by Toyota's European Design and Development center in Nice, France with an 8-bit mentality. That's not a put-down. It's actually the style that designers were going for with the FT-CH, and the press conference included references to Contra, Megaman and Super Mario Brothers."

"Toyota said the two-door FT-CH, 22 inches shorter than the Prius, is lighter and more fuel efficient and its styling, inspired by 8-bit video games popular during the 1980s, is intended to appeal to younger buyers."

Although I personally can't pinpoint what's so "8-bit" about this hybrid, (other than those fancy pixelated vents) it's pretty cool to know the NES Mega Man outings served as a visual inspiration.

More images of the FT-CH available at Auto Blog Green.