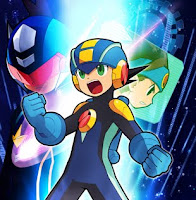 In a thread over at Capcom-Unity, Christian Svensson, Capcom's Vice President of Strategic Planning and Business Development, stepped in to field a fan's inquiry regarding a potential Western release of Rockman EXE Operate Shooting Star. His response:


"For the moment, no plans for a Western release."
And just like that, an English release of OSS is swiftly denied. While it's by no means a dead end (plans do change here and there), it's still unfortunate.

What can you do about this? Well, there's always Capcom's new suggestion box, wherein you could kindly request OSS to be released and translated outside of Japan, or you could wait patiently for an inevitable fan-translation patch to surface, which I'm sure isn't too far off...

Many thanks to Jimb0 for the heads up!
Posted by Protodude at 2:15 AM