Reader Charles was cleaning out his basement over the weekend when he discovered this rather fun piece of Mega Man history: 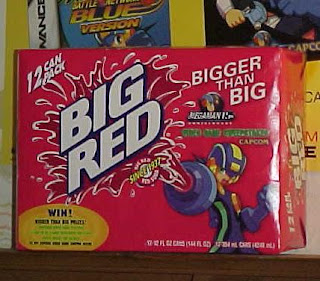 Yet another phase of Capcom's Mega Man 15th anniversary marketing blitz, the blue bomber here graced packages of Big Red soda pop in the fall of 2003.  Apparently, the promotion featured a special offer that let you save $5 on upcoming Mega Man games, and a sweepstakes to win a trip to become a "developer for a day" at Capcom HQ. What a prize, eh?  I wonder what became of the winner...?

Now I don't remember seeing this particular promotion offered at my local grocery store, but I do recall memories of a similar promotion with ASAP Pop-corn. I still have that package lying around somewhere; I'll post it up when I find it!

Thanks, Charles!
Posted by Protodude at 12:51 PM