Whether unintentional or by sheer lack of originality, the similarities between Mega Man 10 Robot Masters Blade Man and Solar Man and age-old fan designs are pretty surprising... 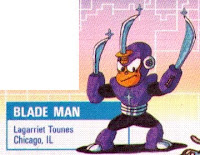 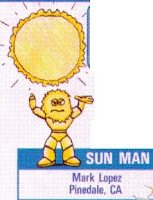 "Sun Man" and "Blade Man"(?!) here are apparently old entries from Nintendo Power's design-a-Robot-Master contest.  Back in the early 90's, Nintendo Power magazine gave North American fans a chance to submit designs for new Robot Master characters, who if chosen, would be featured in the newest Mega Man game, earning an honorary position among the Robot Master roster.

These two didn't win back then, but it looks as if they're finally getting their due, fifteen years later.