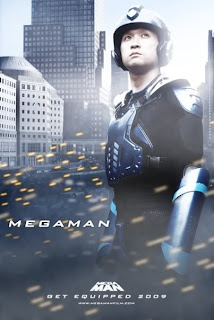 After a little delay, director Eddie Lebron returns with a couple updates regarding the status of his upcoming live action Mega Man fan-film.

According to Eddie, in approx., four weeks, the current rough cut of the film will be screened for a test audience at MAGFest, a video game and music convention in Virginia.  MAGFest attendees are more than welcome to preview the film, and should reception be positive, the film will be complete and ready for release!

In related news, Eddie announced a collaboration with fellow student Andrew Decrescenzo to produce a Mega Man comic based off of the film.

Planned to release sometime before the premiere, the comic will chronicle the events leading up to the film, focusing in on the histories of Dr. Light and Dr. Wily.  Sounds exciting!

Check out Eddie Lebron's official blog for future updates.
Posted by Protodude at 11:24 AM