A supposed inside source brings word that Capcom, in lieu of releasing Rockman EXE Operate Shooting Star in the US, will simply port over the title's multiplayer mode, "Star Colosseum", to Nintendo's DSiWare service as a standalone downloadable game.


"Star Colosseum" a multiplayer mode featured in Rockman EXE Operate Shooting Star (an enhanced port of the original Battle Network), allows up to six players to do battle wirelessly using a single copy of the game: 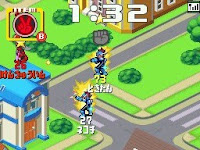 Not only will we be seeing an independent version of the Star Colosseum mode, the tipster also claims that enhancements for the US version are under consideration such as the inclusion of Wi-Fi multiplayer and the addition of at least one new playable character.

With lack of official confirmation from Capcom themselves however, it's best to take all of this with a grain of salt.

Thanks for the tip, Anon.