Often, fans and non-fans alike refer to Mega Man as the "Blue Bomber." It's a nickname that's stuck with the character for many, many years. Yet, most of us remain unaware of the title's

So, where did we get the alias "Blue Bomber" come from?  Look no further: 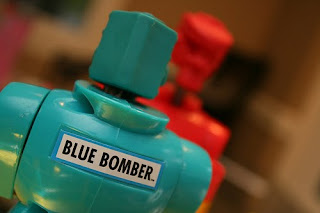 (Guess that would make Proto Man the "Red Rocker"?)


Now that we've got the possible origin of the name, who popularized it?

According to TVtropes, the nickname made its debut in the seventh issue of Nintendo Power wherein Mega Man 2 was the cover story.  After that, the title made its way around the fanbase and, sure enough, Capcom eventually recognized it as the character's official nickname, going so far as to include it in commercials,  and even within some of the more recent games like Mega Man 9 and Star Force 2 (MM9 had an achievement named after it, and dialogue in SF2 references the title).


Pretty cool bit of trivia, wouldn't you say?
Posted by Protodude at 12:00 AM