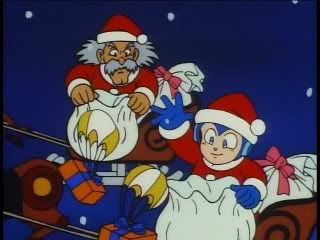 Hope all of you had a great Christmas Eve, and have an even better Christmas!  If at some point you're feeling a bit bored on this very fine day, feel free to check out a few winter/icey themed Mega Man cartoons after the break!

Have a good one, everyone!

Mega Man Ruby Spears 'toon - "Ice Age"
Dr. Wily steals a super freeze technology from Zero Refrigeration Company to create a giant glacier and freeze cities, drive out their leaders, and replace them with his robots (and thats in his words). Ice Man, however, decides hes being replaced by Air Man and double-crosses the evil scientist.

Mega Man NT Warrior - "Ice Ice Baby"
All the water in DenTech City has dried up! World Three has captured Tory and his father Dr. Froid and forced them to use their NetNavi IceMan to freeze the programs that control DenTech City's Waterworks. Lan and his friends rush to save the day, but with MegaMan encased in ice and the Waterworks decaying, can they possibly stop World Three in time to restore the city's water?

...and last but not least, this rather cute Christmas scene from the "Upon A Star" anime:

Posted by Protodude at 9:57 AM