Fake Rockman Game Makes Me Yearn For The Real Deal

Now here's a rather interesting blast from the past: the following scan, an advertisement for a fake Rockman game by the name of Rockman V: Confrontation! Dr. Marvel!, appeared within the pages of volume eighteen of Capcom's popular "Secret File" mini-magazine: 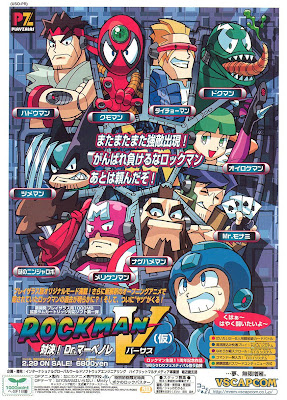 A clear spoof on Marvel vs. Capcom: Clash of Super Heroes, the fake game would have supposedly pit the blue bomber against the likes of robotic versions of iconic Marvel and Capcom characters such as Spider-Man, Wolverine, Morrigan, Strider, etc.

What's really cool about this is that the characters featured all have their own Mega Man boss names! From the top left and going clockwise, we have:

Unfortunately, RMV is nothing more than a product of clever marketing, created for the purpose of promoting the original MvC, which was slated to hit the scene shortly after the ad went public.

Too bad this isn't real...what a great concept!

More Secret Files insanity at Fighting Street.  Thanks to Quick for the translation!
Posted by Protodude at 10:57 AM