Your Weekly Famicom has unearthed what is quite possibly the very first look Japanese gamers got of Rockman: a magazine article from Famitsu's October 1987 issue.  In addition to providing old screenshots and info, this early look at the original Rockman revealed that the game once had a longer title: The Battle Rainbow Rockman. 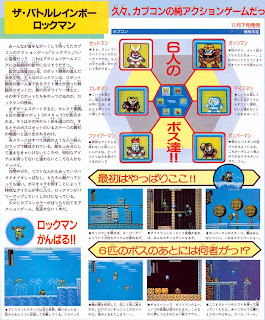 As odd as it may sound, the title is quite appropriate once you consider Rockman's trademark ability of changing color when using a special weapon.  After all, Capcom once considered naming the character "Rainbow Man", but due to copyright conflicts with the Toho Co.'s television superhero Rainbowman, the name didn't stick for too long, and Capcom eventually settled on "Rockman."

For a better look at the above scan, and an English translated version, head on down to Your Weekly Famicom.
Posted by Protodude at 12:13 AM