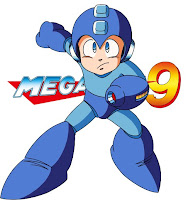 NP: Was there any feedback you received from fans on Mega Man 9 that was especially surprising?

Inafune: It was a great, happy surprise for us that the NES style was so widely accepted.  In the early stage of development, we internally discussed the option of having both old-school NES style graphics and next-gen style, [and we'd allow] the player to choose between the two.  However, we believed that a revival of the NES style would surprise people and be appreciated.  And the result exceeded our expectations -- so many people enthusiastically welcomed the NES style.


The option of choosing between old-school and "modern" style graphics would have been a surefire way of appealing to all types of Mega Man fans. Too bad this concept didn't get off the ground.

The full interview available in Nintendo Power issue #250, on sale wherever magazines are sold.

Credits: GoNintendo and Jimmy for providing a transcript
Posted by Protodude at 9:24 PM