Fans will recall that Mega Man: The Wily Wars (a compilation of the first three MM games for the Genesis/MegaDrive) wasn't released in cartridge form in North America; instead, it was an exclusive playable title on Sega Channel, a now defunct gaming-on-demand service for the Genesis.  However, a recently discovered package art indicates that at one point, Capcom might have considered a cartridge version for NA: 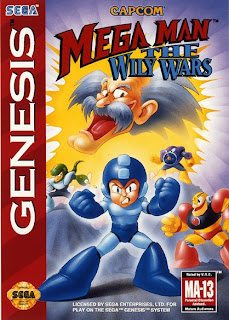 A muscular blue bomber with a manly, pissed-off face?  Yeah, seems like a legitimate early 90's Mega Man box art to me.  But, how can we be sure it's official and not fan-art? (after all, the source of the image is DeviantArt)

Have a look at this GamePro scan from July '94. A cropped version of the package art appears alongside an article for the Wily Wars, which almost sounds as if the game was initially headed to cartridge form as opposed to Sega Channel.

Think it's legit?
Posted by Protodude at 3:30 PM