Take to the Stars In 'Mega Man Space Rescue' 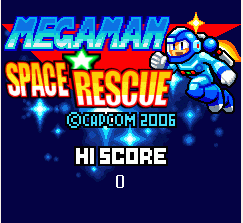 Originally released in 2004, 'Rockman's Space Rescue' was apparently released onto the Black Berry platform in late '07, re-branded as "Mega Man Space Rescue."  Yeah, this one totally slipped underneath my radar; had no idea it made it to our shores. Anyway...

Players guide a jet pack-bound Mega Man through a series of twists and turns, avoiding black holes and asteroids.  The goal of each stage is to rescue a specific amount of lost astronauts (hence the title, "Space Rescue") before Mega runs out of jet pack fuel. Once you've rescued the the astronauts, you're required to locate the "goal point", which teleports you to the next stage.

It's a simple little game; hit or miss. Recommended if you're looking to give you BB some Mega Man love.  You can grab a trial version of the game for free at BlackBerry Today.
Posted by Protodude at 12:27 PM