Just before Sony Computer Entertainment America pulled the plug on the North American release of Mega Man Battle & Chase,  Electronic Gaming Monthly was home to a short-lived ad campaign for the title in 1997. The ad, in all its glory, below; 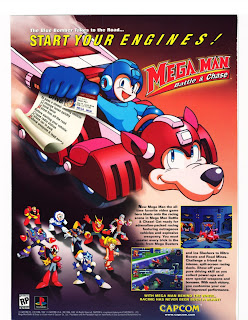 Targeted for an April '97 release in NA territories, B&C was inevitably canceled at the hands of SCEA's jurisdiction. Sony Computer Entertainment Europe, however, was a bit more lenient, and allowed the game to be released onto their shores in '98.  Nearly a decade later, in 2006, Battle & Chase got a legitimate US release as an unlockable in the Mega Man X Collection.  In the end, everything worked out!

Needless to say, it's amazing to see just how close B&C got to releasing in North America.
Posted by Protodude at 3:37 PM