At the Tokyo Game Show today, Capcom held a special stage event where some Rockman EXE Operate Shooting Star information was presented. Unfortunately, there wasn't anything really new, just a reiteration of  we've known for a little while now.  Summary below: 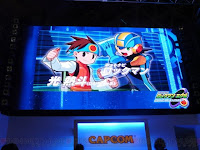 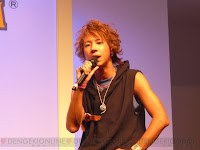 Producer, Takeshi Horinouchi took the stage to discuss a couple of the new elements added to the DS "remake" such as the inclusion of a bottom screen map (added to make navigating the internet easier), minor battle system tweaks and the addition of voice acting snippets courtesy of the Rockman EXE anime VAs. Horinouchi was particularly devoted to getting the actors from the show to reprise their roles for OSS. 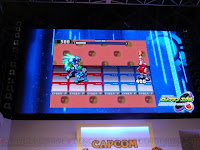 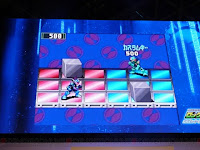 Players have the option to play as either Rockman EXE or Shooting Star Rockman after a certain point in the game. SSRockman can lock onto foes from a far and will have his own unique set of "Shooting Star" battle cards. Still unclear how cards/battle chips differ from each other.  There's also details about a new program advance by the name of "Double Rockman", which summons both Rockmen onto the battle field to unleash a massive simultaneous attack. 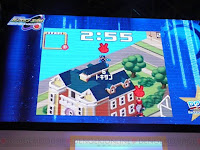 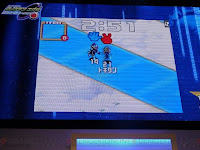 Moving on, details for "Rockman Star Colosseum" were presented. If you've played around with the Sky High Coliseum in Star Force 2, you know what to expect here. Six players attempt to grab as many stars as they can in the allotted time. Players are able to use items and utilize a sort of "rock-paper-scissors" system to steal opponents' stars. Rockman EXE, Shooting Star Rockman and Blues are playable characters. Only a single cartridge is required to play.

Well, that's all for now. Expect more OSS updates tomorrow with the arrival of another stage event.

UPDATE: a few more additional screen shots from Inside Games and Famitsu.

More photos of the event available at Inside Games and Dengenki Online
Posted by Protodude at 10:40 AM